I don’t have a photo this week, instead I am sharing a video circulating on the web that I made myself watch last night.

When police wearing militarized gear charge peaceful protestors on private property, I see a community consumed with racist fueled hate. Baton Rouge is a microcosm of our country.

White people like me, privileged simply by the color of our skin, cannot look away, or excuse away, what is happening. If you say nothing when someone defends militarized police actions like this, you are part of the problem too.

This is reposted from a new blog, by Ellen Oltman Kellner, Ellen is Okay.

My son’s experience yesterday in Baton Rouge, and thoughts following. The militarization of our local police departments terrifies me. -Ellen Oltman Kellner

I don’t tend to post long statuses, but I find it hard to stay silent after what I saw in Baton Rouge. This post is intended to urge white people (myself included) to participate more fully in the movement against racism on all levels. I do hope you take the time to read this.

Yesterday, I saw dozens of police officers clad in riot gear and armed with assault rifles violently suppress a nonviolent protest calling for police accountability, peace, and justice in Baton Rouge. Despite the fact that the protestors were acting within their constitutional rights to assemble peacefully, the police arbitrarily determined that it was no longer a peaceful protest and forcibly removed people from the sidewalks and even from the home of someone kind enough to open her space to the demonstration. The police treated the protestors like they were violent criminals ready to riot when in actuality, the only thing that threatened violence was the militarized and aggressive police force.

It is this kind of confrontation, out in the open, that makes it so clear to me that the police (and I don’t necessarily mean individual officers, but rather the overall nature, culture, and function of modern American police) really does not protect and serve the American people so much as the status quo – which means, of course, that it protects and serves white people’s interests over the interests of black people. This is such an obvious and visceral fact to any person of color, but as a white person, it’s easy to avoid. I never even faced the threat of police brutality until I participated in this protest, and even then, I was significantly less a target than any black person was and I would have been subject to significantly less violence. Moreover, as a white person, this conflict could have been entirely out of sight and mind had I just stayed home and chosen not to think about it. For black America, there is no such choice.

I have also been reflecting on the nature of organized oppression and racism in America today and how it is not confined to police brutality, let alone such obvious confrontations with the police. Racism is supported by our criminal justice system, our educational systems, our health care systems, local housing policies, corporate hiring procedures, macroeconomic policies, and individual consumer decisions, to name just a few. In general, there are endless opportunities to confront racism in American society. And for white America, it is just as easy to avoid these confrontations in everyday life as it is to stay at home from a protest.

So white people, let’s not “stay home” – let’s confront the ways that racism impacts our interpersonal relationships, our workplaces, and our communities. Let’s support local leadership and vote to bring about change. Let’s focus on transforming the systems of oppression in a constructive and lasting way. Perhaps most importantly, let’s address and correct the ways in which our actions (or inaction) serve to uphold systems of racism. If we struggle to find any such opportunities, we aren’t looking hard enough.

I also write this in the hopes that you all will hold me accountable to do the same.

I leave you with this: as many leaders have said before, we cannot fully be free until we liberate ourselves from the role of the oppressor and inextricably tie our freedom to that of the oppressed.

It isn’t hard to deconstruct the rantings of someone who uses the vocabulary of a third grade bully. Presumptive Republican Presidential Nominee Donald Trump has surrounded himself by people of the same mindset. A Tweet by King Robbo,  @realkingrobbo, who identifies himself as a lobbyist and “Donald’s General of Memetic Warfare” calls for bringing back one of the very worst elements of Jim Crow days, “disappearing” of black people.

Thank goodness for screen shots that capture the incredible amount of hate being spewed by Trump and his band of thugs. @realkingrobbo Tweeted this, but later deleted it:

#BlackLivesMatter leader DeRay McKesson was arrested in Baton Rouge, LA Saturday night during a peaceful protest. The march was held in response to Alton Sterling’s death Tuesday night when Baton Rouge police officers shot him multiple times, after tackling him to the ground.

How does “Donald’s General of Memetic Warfare” respond to McKesson’s arrest? He calls for Baton Rouge police to, “Come on boys, be HEROES!” by hoping @deray gets “disappeared.”

If you’re wondering what kind of police state Donald Trump and his henchmen would try to impose on the United States, or at least on people of color and any other groups Trump hates, this is a stunning example.

This is not an election where Trump supporters each of us may know can be excused away for supporting this vile person. When it comes to hate and discrimination, there really isn’t any room for dividing up the pluses and minuses of a candidate. Votes cast for Trump are votes cast for “disappearing” black men under police custody.

I want to start by being very specific about who I am talking to; this post is meant for people who look like me, those of us with white skin.

Many of you woke up this morning and heard the news about Alton Sterling, the 37 year old man who was shot and killed by the police in Baton Rouge, Louisiana. The sickening feeling in your stomach probably hit you hard as you watched the cell phone footage of a police officer charging and tackling Sterling to the ground. You knew what was coming next. And, within seconds you saw it: the police officer mounts Sterling like a UFC fighter. There is no confrontation. No struggle. Sterling is subdued and then another officer yells “Gun. Gun.” The officer on top of Sterling pulls his gun and within seconds fires multiple rounds killing Alton Sterling.

This morning my Facebook feed is full of yet another hashtag, #AltonSterling. So many of the Black and Brown people I’m connected to have no need to see the video. They say as much. They already know what happened, and, sadly, how this will play out. There is outrage; there is disgust; there will be calls for patience and to let the system work; what there won’t be is justice. And this is where I find myself this morning. Pondering my role in justice. What I’ve come to is overwhelming in its simplicity and crushing in it’s complexity. We are responsible for justice.

I don’t mean we in the vague and generalized sense that it is often used. I mean we, me and you, people with white skin. The reason this genocide against people of color continues is because far too many of us remain complicit in our silence. I thought about not writing this this morning. I thought about just retreating in my feelings of disgust, outrage, and grief. But that is not my job. Every time I, or anyone of you, retreats into silence we breath life into the killing machine. 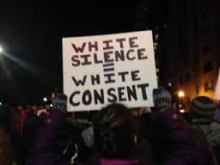 Every time we urge restraint or make apologies, or rationalize this brutality we are degrading our own spirit. And make no mistake this is a spiritual endeavor. Our souls are being crushed under the weight of whiteness. How much longer can we take it? How much longer can we acknowledge how broken our world is and ignore the weapon used to break it?

I also don’t mean justice as in jail time for the police. Though that would be something, I think. I mean justice as in creating a world that truly values the lives of Black, Brown, Asian, and Native people. I mean a justice that leaves no need for an Ethnic studies curriculum because truth-telling is already the curriculum. I mean a world where #BlackLivesMatter and Native Lives and Latinx Lives and Asian Lives. I mean a world where Donald Trump would be embarrassed to show his face, and my students wouldn’t chuckle at the idea of not having to struggle. I mean that kind of justice. We are responsible for ushering that world into existence.

The first step to creating this justice is to understand how it was sidelined in the first place. We must understand the way that whiteness — fitting into the Anglo-Saxon archetype –has been valued historically via formal avenues such as legislation and school curriculum as well as informal ones such as social customs,traditions and practices. Because much of this is passed down through generations, or happens away from public scrutiny, or is largely implicit it is necessary to learn and then unlearn this sordid history and way of being. Once we can come to grips with the ways whiteness keeps us from our own humanity and strangles our souls there is no other choice then to struggle for this justice. We won’t struggle because we are trying to help anyone else, or feel bad for them; we will struggle because our own freedom, our own humanity, is tied up with everyone else’s. As we continue to bear witness to whiteness destroying communities of color while cannibalistically devouring those of us with white skin this unlearning is the only choice we have if we ever hope for peace.

This last week a petition went around calling for the firing of Jesse Williams because his speech at the BET Awards was “racist.” When Shonda Rhimes heard about it she shut it down quickly, this is positional power, and it’s a real thing. Well, white folks have positional power in society. Once we have unlearned whiteness (and even before that) we need to be using this power not to simply name our privilege and then cower behind guilt, that is about as weak as weak gets; we need to use it to stand up and demand fundamental, radical, structural changes. To fail to do this is to betray humanity, it is to betray ourselves. There must be no compromise here. There is no compromise with the humanity of our brethren. This is especially true on days like today, days when whiteness has taken another life. Left another family fatherless. Left another community in mourning trying to survive loss. These are the days when our voices need to be the loudest, they must be clarion voices calling for the dismantling of whiteness.

The silence is deafening and it must be broken. Lives, ours included, depend on it.