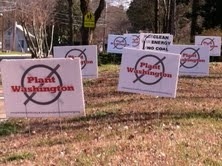 I posted this photo on January 25, 2012 after Cobb EMC abandoned Plant Washington and resigned itself to a likely $15M loss on the proposed coal plant it had bankrolled with co-op owner/member dollars.

Almost 6.5 years after it was announced as a “done deal,” Power4Georgians has asked for a permit extension for this because P4G chose to delay construction.

Today is the last day to tell the Georgia EPD that Power4Georgians has had plenty of time.

We’re all living on the same small spinning piece of real estate sharing the limited water and air that has to sustain all of us. Every one of us have skin in this game.

Sign and share this message to the Georgia EPD TODAY and say that after almost 6.5 years, “enough is enough.”

This week started with Mary Landers at the Savannah Morning News reporting that employees at King American Finishing (KAF) were told to drink bottled water at work for the past six months. Tests of two wells at the company’s textile and chemical plant in Screven County found unacceptable levels of cadmium and phenanthrene (known to cause cancer, cardiovascular disease and other serious health problems). An attorney for KAF told Landers in an email that Georgia’s Environmental Protection Division (EPD) ordered the company to switch to bottled water.

Landers contacted EPD Director Jud Turner, who said that the EPD had not issued that requirement.

Someone isn’t telling the truth.

Both the state and the Chicago based company keep telling concerned citizens that everything is okey dokey. But it isn’t.

Last night the Statesboro Herald reported that King America now says the initial water test results were wrong. Why should we believe KAF or, for that matter, the EPD?  Both have talked in circles for two years when tens of thousands of fish died in the Ogeechee, and people ended up in the hospital after swimming in polluted water.

What did the EPD tell 200 citizens during Tuesday night’s public comment session on a proposed permit for the plant? The Savannah Morning News reports that EPD official Jane Hendricks said, “Please understand that under the law EPD has a very limited ability to deny the permit.” The paper goes on to say that Hendricks said that the special conditions that can trigger a denial don’t apply in this case.

Based on newspaper and television coverage, that didn’t quell citizen outrage. They went ahead and took the EPD and King America to task for polluting the river, setting unreasonable discharge limits, failing to respond quickly to citizen complaints, making a mess of the water and wildlife, driving down property values, and hurting businesses based on river activities like boating and fishing.

But Ms. Hendricks’ statement that the EPD can’t easily deny a permit is telling on both  EPD and state leaders. If the EPD was really in the business of proactively protecting our natural resources, they would be all over state legislators each session asking them to put some teeth in their enforcement abilities.

And if state legislators wanted the EPD to protect our water and air, wildlife, drinking water, land, and swimming holes, they’d pass some laws that would empower the EPD to do just that.

In the end, they continue to do nothing. It doesn’t seem to matter how many fish die, how many citizens end up in the hospital after swimming in polluted water, how many people continue to boil water from their wells out of fear of the poisons that may be in it, or how many small businesses are crippled due to boaters, fishermen, and families who just don’t want to chance getting sick from whatever is lurking in our rivers and streams.

It does matter to the citizens and taxpayers. And we are tired of hearing, and feeding, a toothless guard dog barking on our porch.