Earlier this afternoon the Atlanta Journal Constitution sent out a news alert concerning the resignation of Dean Alford, a member of the Georgia University System’s  Board of Regents. Alford was recently reappointed to the Board by Governor Brian Kemp.

The newspaper details that the Georgia  Attorney General and the Georgia Bureau of Investigation issued arrest warrants for Alford for creating a fraudulent invoice submitted to the state, and for forging the signature of a university employee.

What did Alford do?

The paper’s coverage includes, “Alford is accused of creating a fraudulent invoice acknowledgement form, dated Sept. 24, to submit to a company called Versant, state officials said. The document is alleged to have falsely asserted that the University of Georgia would pay Versant $487,982.88 to satisfy a debt owed to Alford’s own company, Allied Energy Services, LLC, located in Rockdale County.”

That’s not the biggest amount of money, according to the AJC. The article continues with, “He’s also suspected of transmitting fraudulent documents to Versant to make the company believe he had legitimate purchase agreements and accounts receivable with various entities, state officials said. Alford was attempting to sell such accounts receivable to Versant in exchange for $1,798,327.06, investigators said. ”

Alford purchased Allied Energy Services for pennies on the dollar when a judge ordered Cobb Energy holdings, a private shareholding company spun off from the nonprofit Cobb EMC, to be dissolved. Alford’s “haul” at Cobb EMC, the electric membership co-op in the north Atlanta suburbs, was close to $18Million according to 2015 news coverage.

But there’s more. Much more. 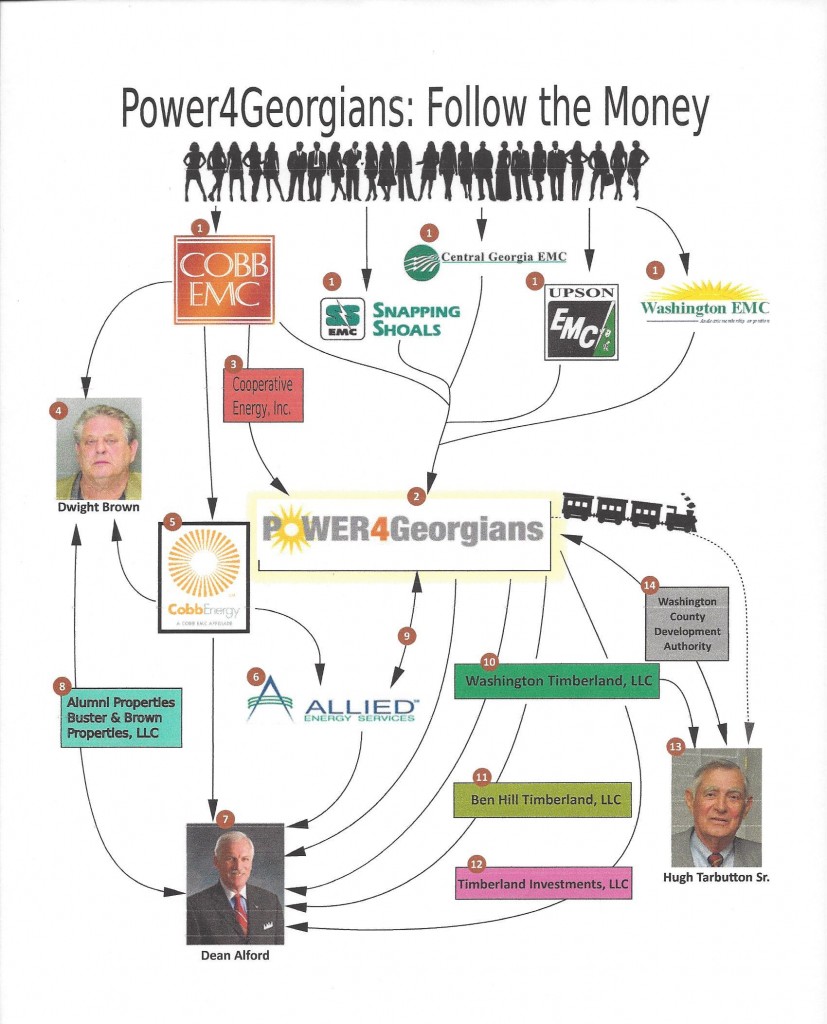 Allied Energy Services was awarded a no-bid contract to develop Plant Washington, a $6Billion proposed coal plant that soaked up millions of dollars from EMCs in Georgia under the umbrella of Power for Georgians. The electric co-op in Washington County, Washington EMC, sunk $1Million of member-owner dollars into the boondoggle plant, slated to be built just miles from my home, and the homes of a small group of local citizens who became the Fall-Line Alliance for a Clean Environment (FACE). Alford never secured financing, power purchase agreements, or customers. FACE has never wavered in its grassroots committment to protecting our natural resources and the health of our families and friends.

The adventures of FACE, and those of others in Washington County, have been detailed on this blog since Plant Washington was proposed in January 2008. The saga involves seeing fellow citizens for who they truly are, or are not. FACE leaders earned the rights to our story through hard work and selfless determination.

I’ll close here by adding that FACE and our partners have waited years to throw the biggest celebration to ever happen in Washington County. We’ve got a party to plan and invitations to send to those who stood with us.