The public intelligence report on Russian interference in our Presidential election last year was released from the Office of the Director of National Intelligence yesterday. It is less than 25 pages long in content.

Reading this is where the work of being an engaged citizen begins. Showing up at the voting booth isn’t enough.

from the good folks at Better Georgia:

Gov. Nathan Deal is no stranger to ethics investigations.

In fact, he’s earned the nickname “Teflon Deal” for his ability to duck responsibility for his unethical conduct as a Congressman and as Governor.

But Gov. Nathan Deal’s ethics problems just got much, much more serious.

New reports reveal the FBI and a federal grand jury want to examine documents and witnesses related to Gov. Deal’s ethics violations and an alleged cover-up at the state ethics commission.

WSB-TV and the Atlanta Journal-Constitution are reporting that at least five current and former state ethics officials have been subpoenaed by a federal grand jury.

Make no mistake; this is no longer an ethics investigation.

This is a criminal investigation. 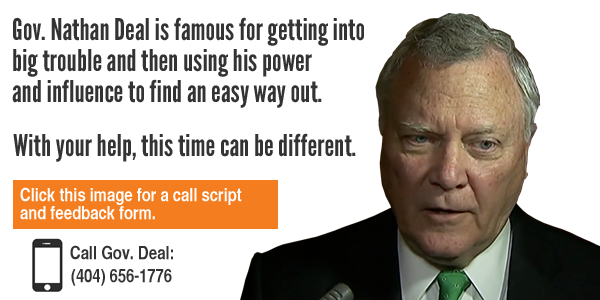 But we’re not fooled.

We know the governor has financial documents he’s worked hard to keep hidden for the past three years.

We know current and former ethics commission employees have accused Gov. Deal’s hand-picked ethics chief of ordering documents removed from the governor’s ethics file while an ethics probe was ongoing.

The FBI and federal grand juries have far more important things to do than worry about disagreements among office employees.

It’s insulting for the governor to claim that an investigation sparked by his own campaign mistakes has nothing to do with him.

If there is nothing to hide, Gov. Deal could have shared these documents months ago.

Instead of fighting every single attempt at an independent investigation, Gov. Deal could simply come clean.

Tell him to come clean today.

P.S. Calling will make a difference. No matter how Gov. Deal responds, we will be able to say he knows exactly what voters want. We’ve provided a script and a feedback form. Call now.